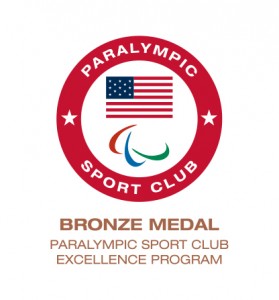  “Paralympic Sport Clubs are critical not only for the development of athletes but also for the growth of the Paralympic movement in the United States,” said Rick Adams, chief of Paralympic sport and NGB organizational development. “We are grateful for the investment these Paralympic Sports Clubs have made in their communities and we are proud to honor their commitment to excellence in supporting future Paralympic athletes.”

The multi-tier excellence program has benchmarks at the bronze, silver and gold levels to give
participating clubs a blueprint for transitioning from a basic provider (bronze level) to an elite provider
(gold level) of Paralympic programming. After a Paralympic Sport Club completes a level, the club will be
eligible to receive recognition and an award designated for the bronze, silver or gold level. Clubs
designated as gold or silver receive a stipend for programming, while bronze-level clubs receive
recognition banners.

“We are honored to have achieved the necessary benchmarks to attain the BRONZE level of excellence
for our Paralympic Sport Club (PSC). This is just the beginning as we continue to work hard to develop
new standards, improvements and identified benchmarks that will move our PSC to achieve SILVER and
then GOLD.” ~ Mark Andrews, Therapeutic Adventures – Paralympic Sport Club – Blue
Ridge~Shenandoah.

When the program launched in 2013, 24 programs were recognized. This year, an additional 15 clubs
 across the country achieved excellence for the first time or moved up a level from 2015. These 15 clubs
 are:

Recognition levels are valid through the end of the quadrennial, but clubs have the option to move up the
 following year.

Participation is open and voluntary to all Paralympic Sport Clubs. All participating clubs must start at the
 bronze level before moving to the silver and gold levels.

U.S. Paralympics, a division of the USOC, is dedicated to becoming the world leader in the Paralympic
 sports movement and to promoting excellence in the lives of persons with physical disabilities. Visit the
 U.S. Paralympics Web site at www.usparalympics.org.